To understand the phenomenon of the Zaouias whose influence in the Moroccan history since the tenth century has been considerable and whose imprint can still be felt in modern Morocco, it is necessary to recall in which context it was born and developed itself.

Morocco before the foundation of the great empires

The western part of the Berber country , as Morocco could be called before the foundation of Marrakesh ( origin of the name Morocco ) was conquered by the Arabs in the middle of the seventh century. Conquered but not subdued for since 740 , the Kharejite uprising against the (orthodox) caliphs of Baghdad was gaining ground among the Berbers

In 742, Salih ben tariff son of a Kharejite proclaims himself prophet and offers to his followers Berghouata a Berber version of the Koran in 80 chapters which he claims was revealed to him. He founds a theocratic kingdom which extends from Salé to Safi (In Islam temporal matters are never separated from spiritual ones) whose total destruction was completed only under the Almohads’ rule, four centuries later.

The heretic kingdom of the Berghouata as well as the numerous Kharejites principalities that were scattered throughout Morocco, or the orthodox Idrissid kingdom of Fez and the numerous principalities that succeeded it after the death of Idriss II, all bear witness to the refusal by the Berbers to submit to a central power more so when the centre is thousands of kilometres away

Such was the situation in Morocco from the time of the Arab conquest to the establishment of the Almoravids in the eleventh century.

Birth and development of the Zaouias 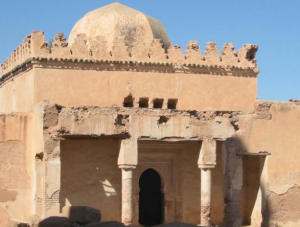 In the tenth century the first Moroccan pilgrims to Mecca coming from a politically disorganized and religiously divided country were overwhelmed by the splendour of the oriental Muslim world . They stayed there (sometimes for many years) and acquired there ideas of reform for their own country . Some of them impregnated themselves with the doctrines of the first Sufis

Back in their country they settle down into tribes (not always their own) where they found religious teaching centres in which they were known as wise and knowledgeable and even as saints, the first Zaouias were born .

They spread out in many places such as the heretic strongholds (like the Berghouatas’) whom they tried to contain and reduce to the great benefit of the Muslim orthodoxy. Their proselytism was not exclusively warlike but it was so to a great extend. In that respect the analogy (maybe hazardous) with the religious and military orders that the Christian world knew much later could be put forward.

This phenomenon of reforming pilgrims which appeared in the tenth century and the Zaouias which arose thereof have marked in a durable and decisive way the History of Morocco, as can be seen in other articles of this website. It is to be pointed out here that it was at this moment that Malekism one of the four rites (the differences of opinion regard the interpretation of the religious law and not the beliefs or the dogma ) in Islam was imported from the East by a pilgrim of Tangier. It is still the official rite in Morocco.