The Galouis constitute a “dynasty” of Caids that ruled a swathe of south Morocco (which varied in size) from the XVIII century (2) to the Iindependence of Morocco in 1956 (3).

Madani Glaoui was the Grand – Vizir (prime minister) of Moulay Hafid, ever since the latter acceded to the throne ( Madani was the major contributor to this accession ) in 1908 until 1911. His junior, Thami , was pasha of Marrakech (sort of vice-king for the southern half of Morocco) from 1912 to Independence. 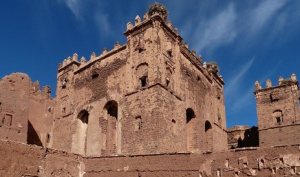 The origin of the Glaouis: remains unclear; they had even self- attributed a Cherif origin (descendant of the prophet Muhammad). A credible story is that their ancestor had fled the Doukkalas (for unknown reason) and had placed himself under the protection of a local marabout whose daughter he married. When his protector died he inherited his baraka (saintly aura, divine grace), and the zaouia (with its assets). Later, the agurram (saint in Berber) became an amghar (a leader chosen by his countrymen). And his position was more strengthened by Moulay Ismael who designated him as chief of his tribe. He settled in Telouet (near Tizi-n-tichka on the southern side of the High Atlas) where he established a souk and a caravanserai. Hence, he had under his control the passage of caravans coming from Tafilalt and the Sahara which had to pay passage taxes (kind of customs fees). He also levied taxes on the goods sold in the souk and he drew comfortable incomes from the caravanserai. In 1856, the sultan Moulay Abderrahmane added a new tribe’s territory to the Glaouis’ “fiefdom” where he established another souk (Zraqten, on the northern side of the High Atlas).

A second important date in the history of the Glaouis is 1893, when the king Moulay Hassan passing through the ridge of Telouet (back from a less than victorious Harka in Souss region) gave to Madani Glaoui a German made cannon to thank him for the warm welcoming his starving troops and himself had received. This cannon is on display at the Kasba of Taourirt (one of the Glaoui’s kasba)  in Warzazat. At this occasion, his ‘fiefdom’ grew even larger by encompassing two more tribes’territories.

Later, in 1907, Madani El Glaoui was the leader of the Hafidist conspiracy that toppled sultan Moulay Abdelaziz (under the pretext of his complaisance vis- à- vis the foreign threat). To thank him, he was named Grand-vizir (prime minister) in 1908. And in the same time, his ‘empire’ was enlarged to three new tribes’territories.

The dynasty reached its zenith in 1912, when France placed under the control of the Glaouis (Madani and Thami) almost all the tribes of the Atlas and those of the Haouz plain around Marrakech.

Madani whose cruelty was legendary died in 1918 from sorrow after he lost his favoured son Abdelmalek (G. Mawwell). Of  his brother Thami, 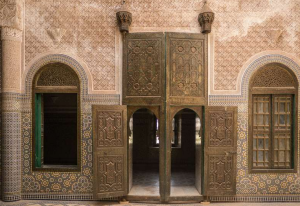 “El Glaoui , the famous pasha of Marrakech during the French rule, was the last of the great southern tribal leaders, an active shrewd supporter of colonial rule and a personal friend of W. Churchill. Cruel and magnificent in equal measure, he was also one of the most spectacular party-givers around – in an age where rivals were not lacking. At the extraordinary difas (banquets) held in his Marrakech palace, “nothing”, as Gavin Maxwell wrote, “was impossible” – hashish and opium were freely available for the Europeans and Americans to experiment with, and “to his guest Thami gave, literally, whatever they wanted, whether it might be a diamond ring, a present of money in gold, or a Berber girl or boy from the High Atlas”.